Serving the communities of Munlochy and North Kessock

Updates on Community Council activities, and other local news are included here.  If you have information for us to share or a comment on any of the articles please let us know.

NOTE:  The planning application has now been WITHDRAWN

The Knockbain Community Council lodged the following report to Highland Council in response to communication received from the Community.

KCC thank you for your comments and reports and suggest you may also wish to forward them onto the planning website.

Change of use of land for siting of touring caravans and camper vans. Alterations to toilet block Northbound Picnic Area North Kessock.

Knockbain Community Council would like to make the following comments in relation to this planning application.

Having consulted with The Community via social media and received a number of email responses, there is a general consensus that there are a number of issues requiring further investigation before any proposed development can go ahead.

Knockbain Community Council, therefore object to this application & would request that it be paused until sufficient consultation with The Community has been made and the undernoted points satisfied.

Concerns have been raised that the exit to the site could present a danger to vehicles as vehicles pulling onto the carriageway will be emerging considerably slower than the on-coming traffic. It is noted that the 'traffic survey' was not recent and had been conducted during the winter, whereas the majority of the site use would be in the summer months.

There have been a number of concerns raised as to the amount of waste that would be produced by the site users. Litter is already a significant problem and this would need to be addressed.

Noise and light pollution to residents bordering on the site has also been highlighted as an issue. Consideration to the location of pitches should be given to ensure this doesn't create issues with neighbouring properties.

There have been concerns raised as to whether the water & wastewater system is able to cope with the extra pressure on it given that it has been reported to us that drainage system already presents problems.

The issue of secure fencing around the perimeter of the site should be considered to give the bordering properties peace of mind.

Given that this site is at the top of a steep banking, several concerns have been raised that the removal of trees will de-stabilise the banking with the potential for landslip. This is an obvious concern for residents in the properties below the site.

Sufficient free space for general exercise & that of pets should be considered to avoid any necessity to cross the carriageway to green spaces.

Knockbain Community Council would like to see further consultation on this issue, with particular emphasis on the management of the site both day time and particularly overnight. The idea has been generally received as being good for the area, but with the caveat that it needs to be properly managed and the report and planning application have little detail in that regard. There are clear European Models for this kind of site and we would urge Highland Council to look at these closely to gain from their experience

We would also insist that the planning permission is clear that this is not a residential site, that is, the site is purely for short term tourist stops.

Knockbain Community Council acknowledge that not all the issues raised are of a planning nature. The information will be copied to Elected Members and The Ward Manager as well as being published on Social Media.

Residents who have commented to the Community Council will be urged to also comment on The Planning Website.

A new plannng application has been submitted by THe Highland Council to change the use of land next to the northbound laybay on the A9 (near Harry Gows). They propose to make alterations to the toilet block and create an area for use by touring caravans and camper vans. 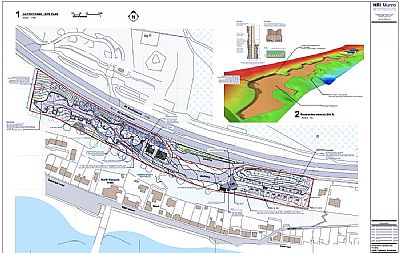 Knockbain Community Council are being consulted as a fill consultee. Please contact us and let us know your veiws so that we can represent the community in our response.